This article is brought to you by General Atomics Aeronautical Systems, Inc.

Countries throughout the world are searching for optimal ways to secure the vastest domain of operation on the planet — the maritime domain.  Threats of piracy, hijacking, smuggling, human trafficking, and other unlawful activities at sea are at the forefront of maritime security efforts everywhere.

General Atomics Aeronautical Systems, Inc. (GA-ASI) has developed a revolutionary remotely piloted aircraft system (RPAS) variant of the MQ-9B to address today’s most pressing security concerns at sea. In early September 2020, the MQ-9B SeaGuardian set out on its first flight over water in Southern California to test its world-class capabilities. Also, in mid-October 2020, GA-ASI began six weeks of validation flights in partnership with Asia Air Survey (AAS) for the Japan Coast Guard (JCG) featuring SeaGuardian.  This year’s test and validation flights have demonstrated how SeaGuardian can be used for a variety of maritime missions, including surface and subsurface surveillance, disaster response, search and rescue, and maritime law enforcement.

Developing and delivering solutions that address the critical maritime need for a long-endurance, persistent, cost-effective, unmanned platform is what sets GA-ASI aircraft apart from any other maritime option.

ABOVE: Video of MQ-9B SeaGuardian during its first over water test flight in Southern California on 4 Sept 2020.

There is a significant advantage to RPAS, like MQ-9B SeaGuardian, compared to a manned aircraft. SeaGuardian is flown by a crew composed of a pilot and a sensor operator connected via geostationary satellite link from a cockpit on the ground called a Ground Control Station (GCS). Having the crew on the ground allows the aircraft to carry more fuel and advanced sensors. This combination enables much longer endurance above the area of interest than manned aircraft.

MQ-9B variants, not just SeaGuardian, are known for their industry-leading endurance. GA-ASI’s new MQ-9B SkyGuardian – already selected by the UK, Belgium and Australia, and being considered by more than a dozen other countries – can stay aloft for more than 40 consecutive hours in certain configurations, with a range of up to 6,000 nautical miles. Also, GA-ASI can customize the RPAS with payloads to meet any mission requirements along with future capabilities, making it a more attractive option than a single-role aircraft. The first flight of the UK Royal Air Force Protector RPAS was conducted in late September 2020.

GA-ASI is revolutionizing the long-endurance RPAS market by providing true all-weather capability and a platform built to achieve Type Certification based on STANAG (NATO standard) airworthiness compliance. This feature, along with MQ-9B's operationally proven collision-avoidance radar, enables flexible operations in civil airspace. This means that SeaGuardian can be certified to fly in segregated and non-segregated airspace, just like manned aircraft, which provides greater basing and operating flexibility.

MQ-9B SeaGuardian uses high-tech sensors to enhance situational awareness in the maritime domain.  One of these sensors is the Electro-Optical/Infrared (EO/IR) “ball,” which provides Full Motion Video (FMV) at great distances. It can be used to recognize and visually identify buildings, vehicles, ships and people, as well as unusual activities such as fire or oil pollution, by day or night.

Coupled with a wide-area, all-weather sensor such as its Multimode Maritime Radar, SeaGuardian provides the best possible capabilities for wide area surveillance.  The Inverse Synthetic Aperture Radar (ISAR) is an important maritime radar mode that allows for classification of vessel type from a distance and through cloud cover. The combination of SeaGuardian’s sensor suite, along with its extraordinary endurance, confirms the value of this RPAS. 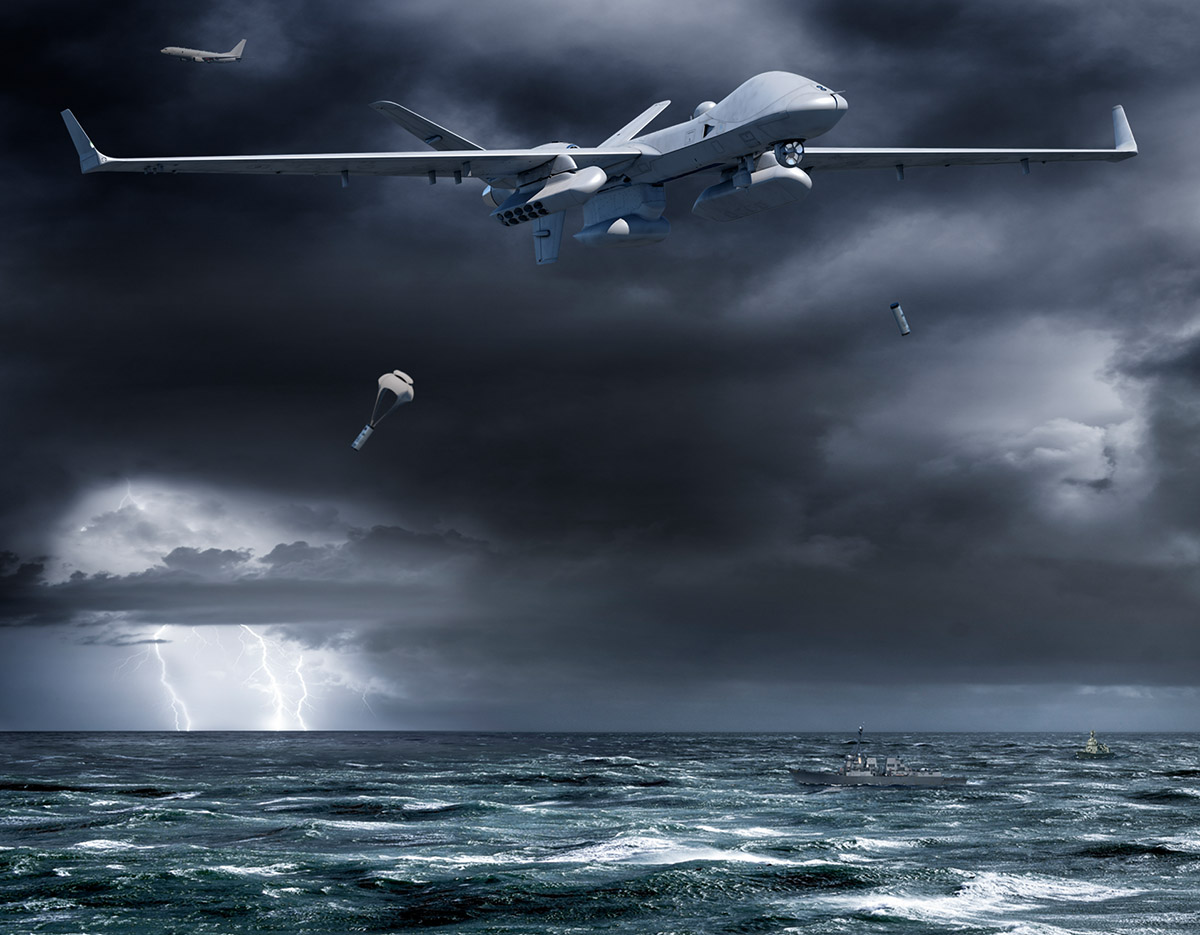 ABOVE: Image of MQ-9B SeaGuardian with Sonobouy Dispensing Pods and Maritime Radar.

Operating as a low-cost complementary capability to Maritime Patrol Aircraft (MPA), MQ-9B SeaGuardian’s GCS can share real-time feeds, as well as share collected intelligence with other agencies and command centers on the ground using the System for Tactical Archival, Retrieval, and Exploitation (STARE). This capability allows MPA to act on specific vessels in the full range of maritime operations, from search and rescue, to law enforcement and Anti-Submarine Warfare (ASW). In a time of limited MPA resources, the ability to visualize, task, correlate, and deliver the best product to decision-makers in a timely manner is critical to maintaining effective control of territorial waters and Exclusive Economic Zones.

GA-ASI technology developments will continue to bring even more utility to medium-altitude, long-endurance (MALE) RPAS. The emergence of this new generation aircraft will satisfy the requirements of persistence, precision, and time-sensitive targeting across the full spectrum of national defence, NATO commitments and homeland cross-domain missions.

With over 90 percent mission availability, and using 200 lbs. of fuel per hour (instead of 2,000 lbs of fuel per hour used by some patrol aircraft), the MQ-9B SeaGuardian is a cost-effective and complementary asset. SeaGuardian’s industry-leading endurance offers “occupation of the airspace” over a target and its environment, with time-on-station that extends well beyond a single day. And there’s more to come. GA-ASI is working with the U.S. Navy to develop and test various sonobuoy dispensing and monitoring capabilities for expanded ASW operations.

It’s no surprise there is so much international interest in the MQ-9B from GA-ASI. Its value continues to increase as more international customers look for solutions to their maritime security needs.