According to a press release from the Romanian Naval Forces, its ex-Type 22 frigate ROS Regina Maria and the Bulgarian frigate BGS Drazki will join SNMG-2 in the Black Sea. 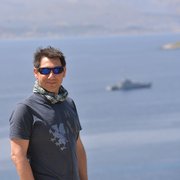